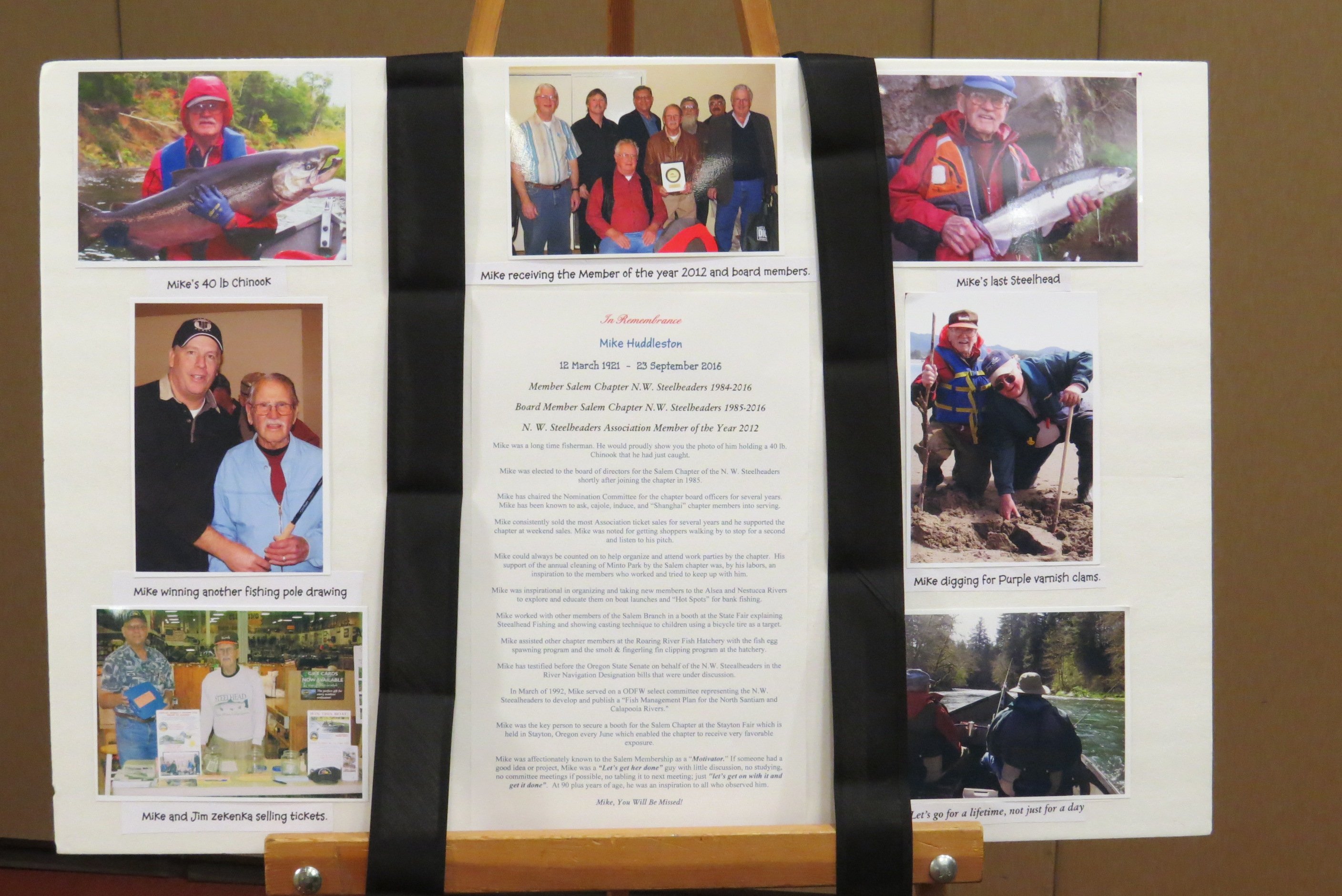 Mike was a long time fisherman. He would proudly show you the photo of him holding a 40 lb. Chinook that he had just caught.

Mike was elected to the board of directors for the Salem Chapter of the N. W. Steelheaders shortly after joining the chapter in 1985.

Mike has chaired the Nomination Committee for the chapter board officers for several years. Mike has been known to ask, cajole, induce, and “Shanghai” chapter members into serving.

Mike consistently sold the most Association ticket sales for several years and he supported the chapter at weekend sales. Mike was noted for getting shoppers walking by to stop for a second and listen to his pitch.

Mike could always be counted on to help organize and attend work parties by the chapter.  His support of the annual cleaning of Minto Park by the Salem chapter was, by his labors, an inspiration to the members who worked and tried to keep up with him.

Mike was inspirational in organizing and taking new members to the Alsea and Nestucca Rivers to explore and educate them on boat launches and “Hot Spots” for bank fishing.

Mike worked with other members of the Salem Branch in a booth at the State Fair explaining Steealhead Fishing and showing casting technique to children using a bicycle tire as a target.

Mike assisted other chapter members at the Roaring River Fish Hatchery with the fish egg spawning program and the smolt & fingerling fin clipping program at the hatchery.

Mike has testified before the Oregon State Senate on behalf of the N.W. Steealheaders in the River Navigation Designation bills that were under discussion.

In March of 1992, Mike served on a ODFW select committee representing the N.W. Steealheaders to develop and publish a “Fish Management Plan for the North Santiam and Calapooia Rivers.”

Mike was the key person to secure a booth for the Salem Chapter at the Stayton Fair which is held in Stayton, Oregon every June which enabled the chapter to receive very favorable exposure.

Mike was affectionately known to the Salem Membership as a “Motivator.” If someone had a good idea or project, Mike was a “Let’s get her done” guy with little discussion, no studying, no committee meetings if possible, no tabling it to next meeting; just “let’s get on with it and get it done”. At 90 plus years of age, he was an inspiration to all who observed him.

Mike, You Will Be Missed!